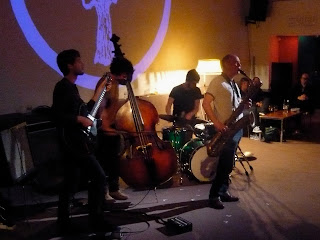 Thursday night I heard Alan Wilkinson (saxophones), Kim Johannesen (guitar), Ola Høyer (bass) and Dag Knedal Andersen (drums) at the Landmark club in Bergen. This was my first meeting ever (my fault!) with veteran sax player Alan Wilkinson,  who blew up  a storm together with the three young Norwegians (seen quite often at the same club). They played a set full of energy, and to be quite honest with you, it was just great!
Let me also mention that the band has recorded material (from a UK tour) they want to release.

I bought a vinyl album with Wilkinson and Talibam! "Dem ol´Apple Pie Melodies" (Bo´Weavil 2010), where it is written on the cover that you hear in Wilkinson´s tone "the strength and grit of a fine british pint served cool and fresh"! You wonder if I want some more? 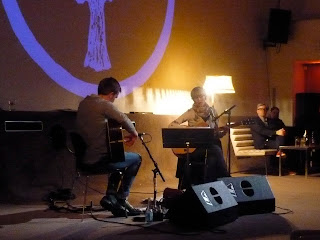 After the blow out from  Wilkinson & co,  the headliners (?) Nude On Sand entered the stage (eh, OK, the floor).  Nude On Sand is Jenny Hval (aka Rockettothesky) (vocal, guitar) and Håvard Volden (guitar). They did some very quiet guitar improvisations and poetry singing (!), and I feel it was a bit unfair to place them in a kind of a vacuum after the quite noisy jazz quartet. I wish Nude On Sand had played first this evening, it would have suited my concentration abilities at least.
Nude On Sand´s first album will be released this autumn, and my guess is that listening through head phones or on home stereo will be the right thing for this music.
Posted by Svenn at 11:40 AM