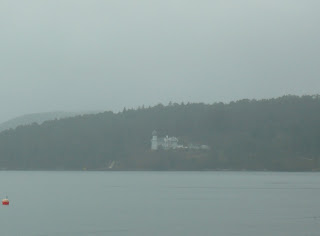 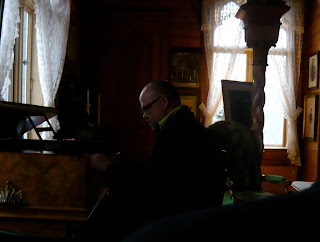 One of Norway´s biggest "pop stars" ever, Ole Bull (1810 - 1880), is celebrated by Nils Økland (violin and Hardanger fiddle) and Sigbjørn Apeland (piano and harmonium) on "Lysøen - Hommage à Ole Bull" (ECM 2011). Here they play Ole Bull´s compositions (like "Sæterjentens søndag", "La Mélancolie") and some of the folk music he was inspired by (like "Stusle sundagskvelden", "Eg ser deg utfor gluggjen"), in their own way, improvising a great deal. Økland and Apeland also throw in some of their own pieces, fitting nicely. Listen to "Belg og slag", a killer tune, where Økland is beating the strings with the bow, not moving his left hand on the neck of the violin at all, and Apeland adds colour playing the harmonium.

This is warm and beautiful music, and just as sad as it has to be. It´s hard to believe that the musicians recorded this, dressed in winter clothes at a freezing cold Lysøen, Ole Bull´s home outside Bergen, using Bull´s old instruments too.
And I would love to hear some of you pronounce the Norwegian titles here! How about "Stusle sundagskvelden" ("Dismal Sunday Evening") for a starter?

It is also hard to believe, that I attended the release concert for this album at Lysøen, together with 25 - 30 other people on Thursday evening! We were brought there by a small boat (properly named "Ole Bull") and heard Sigbjørn Apeland and Nils Økland play this material in Ole Bull´s home. As they do on the album, they played some tunes on Ole Bull´s own harmonium and his Gunneri del Gesù violin from 1734 too. The record is great, and the concert was magic!
I must admit I felt like being among the chosen few this evening.
Posted by Svenn at 8:48 AM