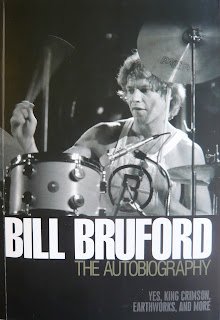 After 40 years as a drummer, Bill Bruford stopped drumming in public, and wrote his biography "Bill Bruford The Autobiography" (Jawbone 2009). Let me just be honest, and admit that except for King Crimson, I never was a big fan of his bands (Yes, Genesis, UK, Earthworks) not that it matters much when it comes to the book!
Bruford writes well, and describes how it feels to play in a band with all the personalities involved, how it is to tour, the studio work and all the time you have to spend away from your family. The book chapters are named after questions often asked, like "Yes, but what do you do in the daytime?", "What´s it like working with Robert Fripp?" and "Do you like doing interviews?".

It seems like Bill Bruford was not very happy when playing with Gong (for a short period only!), describing them as a "traveling misunderstanding", but being Norwegian I just have to smile at the thought of this drummer doing a winter tour in Norway in 1974, driving around without winter tires (OK, I know it´s not funny!). I´m also a bit shocked to hear that two members of Earthworks were fighting with sharp kitchen utensils at the student center in Bergen during the Nattjazz festival in 1988. Just as well I missed that concert!

The book has its witty moments, but Bill Bruford seems to be a serious, hard working  guy and a family man,  and you won´t find many wild party scenes in this book. Disappointing for some of you I guess, but me, I really liked the book!
Posted by Svenn at 8:58 PM

gotta get this book! i'm a huge fan of Bruford, and just about every band he played with.