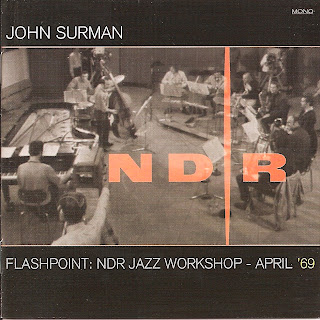 In April 1969 John Surman visited NDR (Norddeutscher Rundfunk) Jazz Workshop to record with English and German musicians.  You may all listen in on "Flashpoint: NDR Jazz Workshop - April ´69" (Cuneiform 2011). Here you get an ordinary CD with three Surman tunes written for the occasion ("Mayflower", "Once upon a time" and "Flashpoint"), and "Gratuliere" by Fritz Pauer and "Puzzle" by Erich Kleinschuster.

What you may hear is great, fresh sounding jazz, small big band style. The music is good on it´s own, but even better when watched with the DVD of the session. In the liner notes Surman says that the style was supposed to be informal, and that is certainly true! We suddenly see camera number two, photographers walking around and microphones dangling in the air. It may come as a surprise to some of you young ones, but they were smoking in studios in 1969.

A great release from Cuneiform! Favorites so far in this house are two Surman tunes: "Once upon a time" (with flugelhorn solo by Kenny Wheeler),  dedicated to Alan Skidmore´s daughter, and the energetic title tune "Flashpoint".
Posted by Svenn at 10:40 PM