Borealis on a Thursday 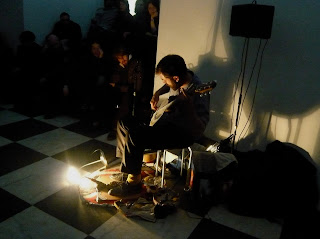 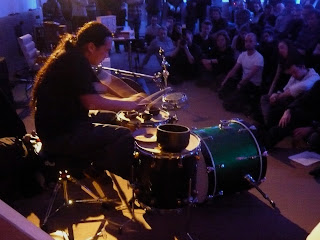 A report from a Thursday evening at the Borealis Festival in Bergen coming up.

Thomas Bonvalet (France) and his solo project "L’Ocelle Mare" started the show. He plays banjo, harmonica and kicks percussion instruments! I can´t really explain what he does, but the concert was fantastic and intense, and I think I´ll go for the genre contemporary-classical-blues? No? Great anyway.

Japanese drummer Tatsuya Nakatani was next, delivering a sweaty solo set, both attacking the skins (I mean it!) and carefully stroking cymbals with bows. Nakatani invited Norwegian cello player Tanja Orning for a short set to end the concert. Very nice!


Nakatani told me after the concert that he really enjoyed playing in an intimate setting like the Landmark club, with the audience being very close to the drums.
He also said I was the first man in Europe to buy the new album (CD-R with hand made cover) named "Bigger Country Boobs" (!), that he recorded with the one and only Eugene Chadbourne. Alternative Country this!

Pierre Bastien & Phonophani (Espen Sommer Eide) were on as the last act, playing electronica-ambient-minimalism on self made instruments and machines (including mekano). Very fascinating stuff! Unfortunately I missed the open workshop they had on Friday, but hopefully someone filmed or took pictures to share?
Posted by Svenn at 10:40 PM