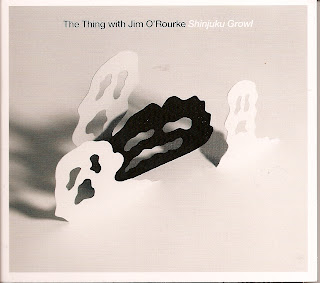 The hard working power jazz warriors of  The Thing, Paal Nilssen-Love, Ingebrigt Håker Flaten and Mats Gustafsson, have visited Japan several times (and our thoughts are going to the people of Japan for other reasons too these days!). In 2009 we got "Shinjuku Crawl" with Otomo Yoshihide (guitar) on Smalltown Superjazzz. This was a live recording from Shinjuku Pit Inn (Tokyo) October 2007, and it was great!
Now is the time for  "Shinjuku Growl" recorded at the same club in February 2008, this time with  Jim O´Rourke on guitar, and it sounds just as good!
They start quietly on the 22:30 minutes long "If Not Ecstatic, We Replay", but we know The Thing, and they soon are going full speed, as they often do, on three of the tracks on this album (9 - 23 minutes long).  The track "I Can´t, My Mouth Is Already Full" (!) is a bit different, since it´s more like a slow and very sad lament from Gustafsson. Strong stuff!

According to a newsletter from Rune Grammofon, received today, it seems like another Mats Gustafsson band, Fire!,  is releasing an album with Jim O´Rourke in May.