Let us celebrate by visiting the YouTube archive with his field recordings once more!

I am late, but have finally started to subscribe to Spotify, and have been listening around for the last few weeks.

Lots of good stuff there and a fantastic place to be for the end user.
Not for the sound freaks I guess, lots of artists missing in there and artists are still far from happy with the money they get from the streaming of their material.

I´m diving into the stream anyway and am testing playlists today.

Let´s see if this playlist is working then, a list of Robert Wyatt covers for your pleasure (I hope!).
Posted by Svenn at 8:45 PM No comments:

"The Summoner", A new album by Kreng (Pepijn Caudron), is ut on Miasmah.

You will not be surprised to hear that the track "Depression" is not a happy melody, and Miasmah writes that the album is "His most personal album to date, The Summoner is based around the 5 stages of mourning and is made after a year of losing several close friends. Hard enough material to work on, he decided to add a 6th stage, entitled The Summoning to be able to arrive at the finalé, Acceptance."

The music is made by the help of 12 string players and the Belgian doom band "Amenra".

I am absolutely sure I will check out this album.
Posted by Svenn at 7:55 PM No comments: 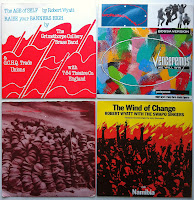 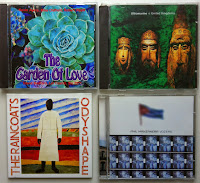 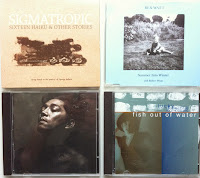 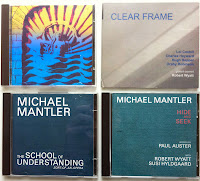 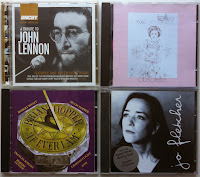 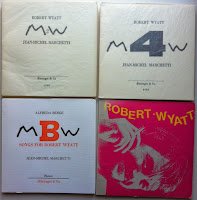 Happy birthday to Robert Wyatt, and thanks for all the music! 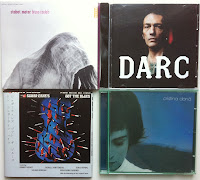 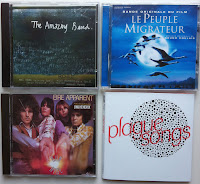 To cite the label: ".. LONER is a result of many years of working together and of mutual admiration. The duo has collected material for LONER during the past ten years, and with a common facination for the mix of electronics, field recordings and acoustic percussion, they decided to start working towards an album with the material they had at hand".

Arto Lindsay and Paal Nilsen-Love at Bergen Jazzforum 23 January 2015.
Posted by Svenn at 9:10 PM No comments: 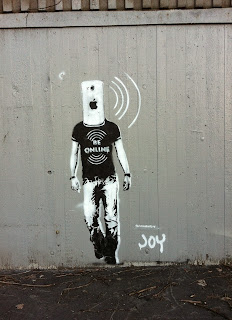 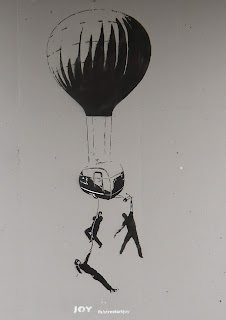 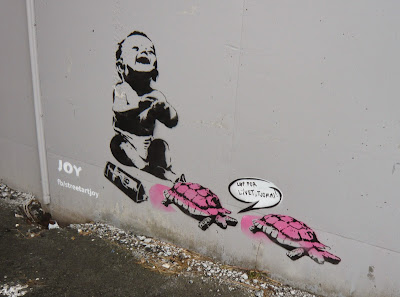 Street artist Joy has been out working in the cold Bergen weather lately. 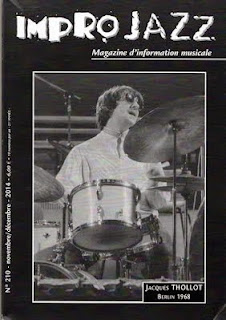 Vinyl, 300 copies only and out in March 2015. No info on recording dates or track names, so this is all i know. And I stole the idea for this blog post from Hibou, Anemone & Bear. 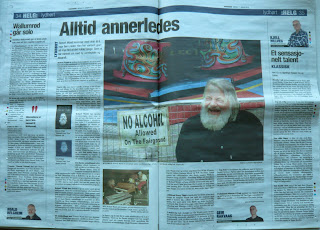 Nice Robert Wyatt piece by journalist Geir Rakvaag in the Oslo based newspaper Dagsavisen 17 January (pages 34 -35), focusing on the new biography and the new Domino sampler.

The title "Alltid annerledes" is the Norwegian way of saying "Different every time".

Biographer Marcus O´Dair will present his book at the Off The Page festival in Oslo on Saturday (24 Jan.), and the festival will also screen the documentary "Free Will & Testament: The Robert Wyatt Story" (2002) (Screening programme right here).


Off The Page Schedule:

13:00
The Man Who Bought An Echo
by Sarah Angliss
Lunch & market mingle

Audun Vinger "Omsider fri" ("At last he is free") in newspaper Dagens Næringsliv (online 22 January).
Posted by Svenn at 8:02 PM No comments: 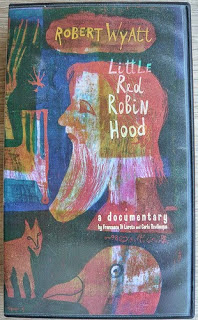 There are plans for an online re-release of "Little Red Robin Hood" - a Robert Wyatt documentary by Carlo Bevilacqua and Francesco Di Loreto (1998).

Follow this new Facebook site for updates and feel free to see my blogpost from August 2014 on the same topic too.
Posted by Svenn at 11:12 PM No comments:

About the album on The Unthanks´ site:

"The Unthanks invite you to Mount the Air.

An invitation to be free, weightless, airborne, to transcend reality, to enter your imagination, to raise the possibilities above the ordinary, to become one with nature, to give yourself up to nature and let the wind carry you to new places. To fly."

Video for the title song over here.
Posted by Svenn at 7:42 PM No comments:

Documentary: The Killing Of Tony Blair

So Robert Wyatt is making some new music?

"The killing of Tony Blair" is a Kickstarter crowd funded documentary.
Posted by Svenn at 3:19 PM No comments: 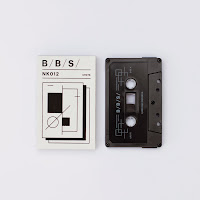 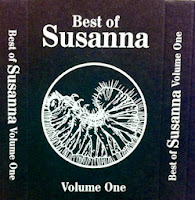 It seems like we have a new back to basics trend with cassettes going.

I saw a Norwegian comic strip the other day, where some hipsters told a straighter guy that it was OK to stream music, that is if you recorded it on a tape recorder first, and then played it!

Anyway I think I have to get myself a new cassette deck soon.

The cassettes of the day in this blog are the first ever musical meeting of the trio B/B/S, being Aidan Baker (Nadja, Canada), Andrea Belfi (Italy) and Erik Skodvin (Svarte Greiner / Deaf Center, Miasmah label, Norway) and Susanna Wallumrød´s Best Of-series of three cassettes, celebrating her ten years as a recording artist (2014).

The Best of Susanna cover design is by Lasse Marhaug.

The B/B/S cassette may also be downloaded from Bandcamp.
Posted by Svenn at 11:50 AM No comments:

Robert Wyatt: Far From the Birds and Cattle

Robert Wyatt sings 'Far From the Birds and Cattle' by Elizabeth Purnell (YouTube) from
'A Season In Hell' BBC Radio 3.

From Jazz Cats To Hot Rats 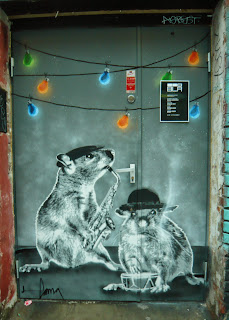 I found these hot rats on the backdoor of the music club Blå ("Blue") in Oslo this week (another photo from some distance here).

Artist: Hama Woods.
Posted by Svenn at 4:37 PM No comments:

A bit late, I know, but here she is! The song was released as one side of a split 7" on Humpty Dumpty Records in 2013, with Le Yéti: "La Moisson" on the other side.
Posted by Svenn at 3:57 PM No comments: 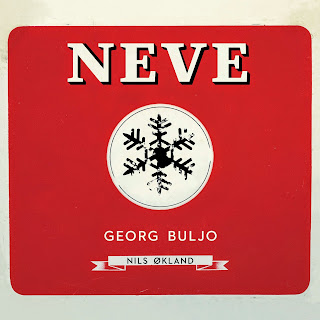 How about a duo with sami yoik and fiddles for your cold winter ears?

I believe you will like Georg Buljo (yoik) and Nils Økland´s (Hardanger fiddle, violin, and viola d’amore) album "Neve" (Duippidit 2014).

The music is composed by Buljo and released on his Duippidit company (no company web site?). About the music his site states he "builds on his Saami traditions with the yoik as the main base but brings along Scandinavian moods and phrases..".

The album title is the Italian word for "Snow", but the music is warm and beautiful and Økland´s fiddles are sounding fantastic as always.

Available from Amazon (UK) and iTunes.
Posted by Svenn at 12:26 PM No comments:

On Dworniak Bone Lapsa´s Facebook:
"We were so incredibly excited when Robert Wyatt offered to play a trumpet part he had conceived on our track Mortalman. When one of the UK's most treasured musical souls makes this kind of gift it creates great energy in the band and production team. It was a while ago but we are still buzzing and even more so on the run up to the album release. Now we will get to share it with everyone who is listening. Thank you Robert".
Posted by Svenn at 2:14 PM No comments: 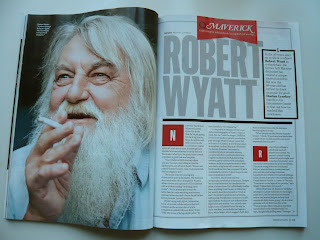 Robert Wyatt is portrayed in Q magazine, issue 343 (pages 52 - 56), in what looks like a series of Mavericks where they are "Celebrating the wildcards who´ve inspired cult worship".

Wyatt: "I did get carried away on drums. Every time I had an idea I would play it. I´ve regretted that since. The drummers I listen to now are the drummers that leave space".

The full text posted on More Dark Than Shark.

Maja Ratkje at The Stone

There are no less than 27 videos from Maja Ratkje´s residency at The Stone (NY) in November 2014 on Kjreilly´s YouTube channel (counted 9 January 2015).

Here you might watch Maja Ratkje and Ches Smith, but check out more videos too for some fine free improv, contemporary and revolutionary tangos.
Posted by Svenn at 9:48 AM No comments: 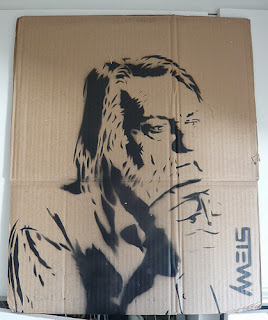 Marcus O'Dair's Robert Wyatt biography "Different every time" is book of the week on BBC Radio 4!

An abridged version by Katrin Williams is read by Julian Rhind-Tutt.

A total of five parts.
Posted by Svenn at 8:54 PM No comments:

Joy to the hotel 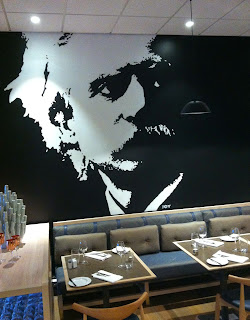 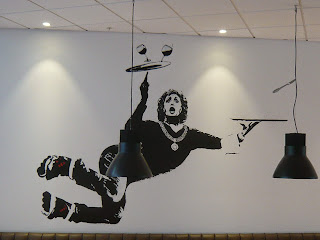 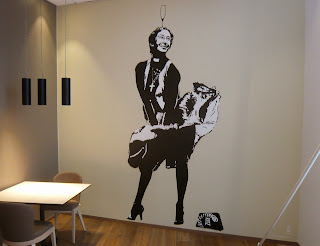 An old guy like me would not dream of asking young people to become vandals and crooks of course, but I must admit that I prefer street art to be outdoors (and on walls that have not been painted for a while).

Still a lot of the best ones now seem to enjoy doing commissioned works like huge murals and decorations in office buildings, training centers and hotels. Everybody needs some money to get by, so that´s not too hard to understand, is it?

I checked out Bergen street art artist Joy´s fine work at the Edvard Grieg Hotel in Bergen, not far from the airport.

Listen to the catchy teaser "Hoksang".
Posted by Svenn at 8:21 PM No comments: 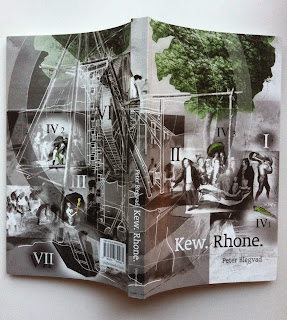 Most of you have heard the album "Kew. Rhone." from 1977 I guess, with music by John Greaves and lyrics by Peter Blegvad?

"Kew. Rhone." is a strange, witty and beautiful album that will leave no listener untouched and everybody bewildered, with song lyrics about a painting of an excavation of a mastodon and one song being 22 proverbs.

In the song "Catalogue of fifteen objects" the words of the first half are descriptions of the objects, like "Coin stacks, several columns - voltaic piles of gold plated bamboo" and later the title "Ladder of kings". No "Baby, baby I´m gonna leave you"- lyrics here!

Have no fear! Uniformbooks have just published Peter Blegvad´s book "Kew. Rhone.", where Blegvad uncover themes and sources of every song, and you get contributions from other people involved or taken by the album, like Lisa Herman, John Greaves, Jonathan Coe and Robert Wyatt and lots of others - all entertaining and interesting, and some way over my head. I will certainly go back and read parts of this book several times, while listening to the record.

Some of the musicians on the album: Peter Blegvad, John Greaves, Lisa Herman, Andrew Cyrille, Michael Mantler and Carla Bley.

Robert Wyatt was not on the album, but has sung two tracks (the title track and "Gegenstand") on John Greaves "Songs" (1994) and Orchestre National De Jazz: "Around Robert Wyatt" (2009).

"Kew Rhone seems to me to be an extremely and unusually successful shot at Not Being Boring for Well Over Half an Hour". - Robert Wyatt, 1997.
Posted by Svenn at 9:44 PM 2 comments:

We have already had a post on Snakes and Ladders performing "Lucky day" in June 2014, and here is "Of night" (Le Triton on YouTube) from the same concert.

Please excuse me while I sleep on it 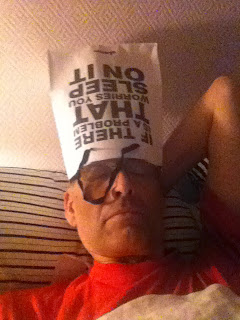 Let me just start the year with an excuse to all of you that have been sending me links to music I should listen to and write about, and haven´t heard a word from me.

Believe me or not, but I might have listened to the music and liked it too, but things have been a bit slow in 2014. It has just been too much for me to digest and blog about.

Regular visitors will know that I am a fan and not a reviewer, just trying to get more people hooked on good music. So I won´t promise to change, even if I know it´s rude not to answer people, and most of the stuff in wyattandstuff will still be music I seek out and buy myself.

(I have a feeling I have been writing this blog post before! Please don´t check!)
Posted by Svenn at 1:32 PM No comments: