This is probably of interest to a lot of you: Phil Miller - The Legacy: Phil Miller´s music on CD is uploaded and musical scores and archives of previously unreleased tapes,live gigs and private recordings are being made available.

I found it via the The Canterbury Scene public group on Facebook.
Posted by Svenn at 2:57 PM 1 comment: 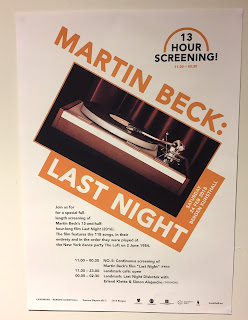 This might be streching it a bit, but here are some kind of Robert Wyatt news from Bergen (Norway)!

"In Last Night the historical material consists of a list of 118 songs, organized in the order they were played at the New York dance party The Loft on 2 June 1984. Since 1970 David Mancuso had been hosting weekly parties in his own home, first at 647 Broadway and later at 99 Prince Street. What eventually became known as The Loft has a unique position in the history of modern music and dance culture. With an intimate atmosphere typified by collective affinities and with the focus on music, The Loft had no commercial agenda — unlike the discotheques that, in time, filled New York with the high-glamour and celebrity factor."

"The 13-and-half-hour-long film version of Last Night (2016) consists of a series of lock shots of a record player where each song is played in its entirety. Each new song is presented from a new camera angle. A total of ten different camera angles are repeated in a pattern based on the Golden Ratio. A hypnotic focus on the slowly moving pickup across the rotating vinyl record emphasizes the physical reproduction of the music. In the exhibition, a specially adapted hi-fi system is used, assembled to correspond to the high-level sound quality one could experience at The Loft."

I have visited the exhibition a couple of times, hearing some random tunes, but last Saturday morning I was alone in the hall watching the beginning of the 13 hours continuous screening of the film, just to hear the third song to be played: Working Week: "Venceremos (We Will Win)", 12-inch single (Paladin Records 1984), with Tracey Thorn and Robert Wyatt singing.
Posted by Svenn at 12:17 PM No comments: