Sorry, but it seems like Google have done some upgrading and changes on Blogger, at least here!

All my links to blogs and other sites seem to have vanished all of a sudden.

I´ll see if I can get at least some of them back in not too long.
Posted by Svenn at 6:48 PM No comments:

An excerpt from the new single Ibrahim, by The Great Divide (featuring Robert Wyatt). To be released on 10" Vinyl on The Interrupting Sheep - 16th September 2016. 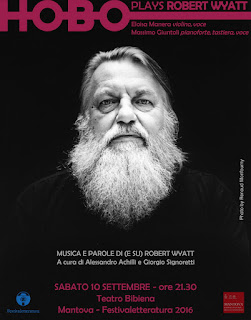 Here is the result of translating Italian into English on Google Translate (from this site):

"To draw a portrait of Wyatt - stimulated by the questions of Giorgio Signoretti - will be Alessandro Achilli, the Italian journalist who more than any other has been able to learn about the amazing love story that binds the English artist in our country, even taking care of the translation the two fundamental wyattiane biographies of Michael King (False Movement) and Marcus O'Dair (Different Every Time). To enrich the meeting some valuable live performance by the duo Hobo Massimo Guintoli and Heloise Manera, in addition to the screening of video materials not easy to find".
Posted by Svenn at 6:48 PM No comments:

"In 2001, Cuneiform released Smoke Signals, a collection of unreleased performances. The band was so pleased with that album that when one of the members came across a forgotten live show on tape - identified simply as "March, 1972", they immediately contacted us, and March is the result. Recorded live in Europe 3/72.." Released September 17, 2002.

Listen or buy over at Bandcamp.


Covers by: Tom Recchion.
Posted by Svenn at 5:52 PM No comments: