Let's pay hommage to Kevin Ayers today, member of the early Canterbury band Wilde Flowers, and also in the early stages of Soft Machine. I guess Kevin was too much of a pop guy to fit in with the art-prog-jazz guys in SF. Later he published a lot of good records on his own, and with The Whole World. Look at this video, it is just beautiful, with Lol Coxhill on sax and Mike Oldfield on bass!
Curiosa: Kevin Ayers sings in a pub in Hanif Kureishi's book:The Buddha of Suburbia.

Are you planning a holiday in Norway this summer? We have several good jazz festivals.
Some of the web pages are less than satisfactory in english unfortunately, and programs are not yet 100% ready, but please check them out. Festivals are in Voss (hurry up for this one!), Stavanger, Kongsberg, and the best of them all Molde.
And yes, there are more of them too! Map of Southern Norway.

I want Robert Wyatt to appear at the Molde festival. Thank you!
Posted by Svenn at 7:07 PM No comments:

Soundclips and videos on a Wyatt MySpace page. Not run by the man himself. Some of the videoclips from YouTube are no longer available.
Posted by Svenn at 7:05 PM No comments:

Some Robert Wyatt quotes collected on BrainyQuote.
Posted by Svenn at 10:41 PM No comments: 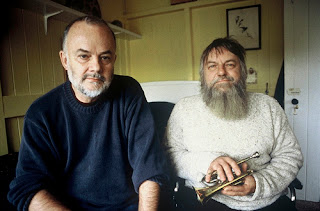 Nice pair of guys, or what? The late John Peel was a fan of Wyatt, and you are welcome to buy Peel sessions of Robert Wyatt, Matching Mole and Soft Machine.
The picture is taken by pinecolonel, and found on Flickr.
Posted by Svenn at 9:34 PM No comments: 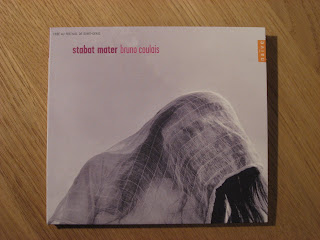 I finally got Bruno Coulais' album "Stabat Mater" (Naive, 2005). Robert Wyatt is on sveral tracks of this live recording, but he was only present with his voice at the concert!
Posted by Svenn at 4:14 PM No comments:

If you like Robert Wyatt, I bet you like Ivor Cutler too. I strongly reccomend the DVD "Looking for truth with a pin/Cutler's Last stand". You get a concert, and a documentary where Robert Wyatt and Alfreda Benge are interviewed (among others).
Rest in peace Mr. Cutler.
Posted by Svenn at 12:07 PM No comments:

The South African trumpet player Mongezi Feza (1945-1975) guests on several Wyatt records. He is on "Rock Bottom", "Ruth is Stranger than Richard" (composed "Sonia") and the live album "Theatre Drury Lane".
If you can take some noise, please check out the Norwegian album "Two bands and a legend, featuring Cato Salsa Experience and The Thing with Joe McPhee", on Smalltown Superjazz. They play Feza's composition "You Ain't Gonna Know Me ('Cause You Think You Know Me)", and also covers PJ Harvey ("Who the fuck?"), James Blood Ulmer ("Baby Talk), The Cramps ("I can't find my mind") and Richard Berry ("Louie Louie").
Posted by Svenn at 8:58 AM No comments: 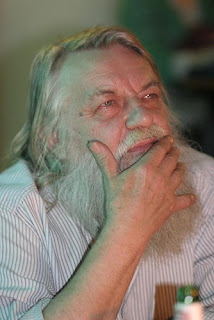 In Ian Rankin's book "Black and blue", there is a scene where our (anti-)hero Rebus is listening to music-cassettes in his car. He switches Wyatt's "Rock bottom" for Deep Purple, to hear "Into the fire". Scary?
Posted by Svenn at 9:17 PM No comments:

Since Richard Wright guests on Gilmour’s DVD, only Roger Waters is missing a Wyatt connection on record? But hey, Pink Floyd played a benefit concert after Robert was paralysed, so let's be generous!
Posted by Svenn at 9:06 PM No comments:

Around the world with Robert Wyatt

Some, not so British, artists working with Wyatt, and a strange video from one of them (C. Dona):

Robert Wyatt is not exactly "big in Norway", like Leonard Cohen and Anthony and the Johnsons, but let’s try to tie him to appearances on records from Norway, or with Norwegian artists:

Henry Cow "Concerts" (1976). First record on the Norwegian company Compendium. Some of it is recorded on the Høvikodden art centre in Oslo.
Michael Mantler "The hapless child and other inscrutable stories" (1976). Terje Rypdal plays some mean guitar.
Anja Garbarek "Smiling and waving" (2001). Yes, she is the saxophoneplayer Jan Garbarek’s daughter, and an artist in her own right. Wyatt even arranged a concert with her, when he was curator for the Meltdown festival.
Michael Mantler "The school of understanding. Sort of an opera" (1997). Per Jørgensen sings (but Mantler won’t let him play trumpet on this one). 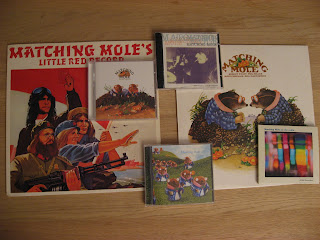 This band existed in 1972, buy these albums:

All songs recorded by Matching Mole:

There are loads of SF albums. Robert Wyatt was on the first four originals, and a bunch of live albums. Why not start with these:

Start with these records: 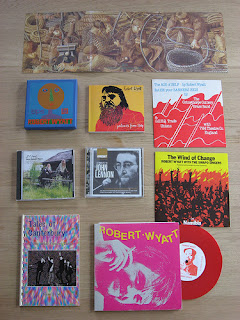 There are more than 50 million blogs, so why another one? As a long time Robert Wyatt fan and collector, this is just another way to spread the disease! This blog is a (slightly broken) mirror of my Norwegian blog “Wyatting”, but will not be as peppered with other stuff I am interested in (books, food, cats etc etc). I might sneak in comments on other musicians or records you just have to check out. Study Norwegian if you want to read my other blog.
Please look at the fantastic discography on the french site “Une discographie de Robert Wyatt”, and listen to the fan club song by Karen Mantler. On this site you will also find an article about a sport we all like: “Wyatting”. A good site on Soft Machine is Hulloder.

Let’s see if this blog is a survivor, it will not be updated daily, but regularly (I hope).
Posted by Svenn at 12:05 PM No comments: