Somebody (@MrPaulDuane) recently tweeted a link to a piece called "Two Intertwined Semi-Venetian Masterpieces" by Glenn Kenny (The Criterion Collection 2015).

I must have read it before but can´t see that I have posted it.

"Venice asserts itself as “a sinister presence” in Roeg’s film ((Don’t Look Now, 1973)) Robert Wyatt aptly notes in the liner notes to a 1998 reissue of his 1974 album Rock Bottom. Wyatt cites Don’t Look Now in his notes because the making of the film, particularly its six-week Venice shoot, is intimately intertwined with the genesis of his classic album—ranked alongside Bob Dylan’s Blood on the Tracks by NME in the year of its release, when it was also awarded an international Grand Prix du Disque in France, and, according to biographer Marcus O’Dair, “still widely considered one of the finest albums ever made.”

Late in 1972, Wyatt’s then girlfriend and future wife, the artist Alfreda Benge, was hired as second assistant editor for the just-beginning Roeg production. Benge had met Roeg while he was shooting the concert doc Glastonbury Fayre, and was close friends with the film’s female lead,Julie Christie. The picture began filming around Christmas in England, and in January of 1973 moved to Venice for location shooting."
Posted by Svenn at 2:54 PM No comments: 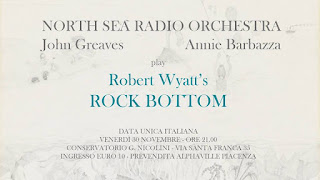 ""In Al Silencio", I was willing to pay tribute to some of the keys songs and singers that have impacted my life so far. This repertoire is composed of some Latino American standards such as la ranchera mexicana "La llorona", and others which are less well-known, such as "Le tengo al silencio", from Athahalpa Yupanqui, the song that gave the Album its title..." Through pieces by Robert Wyatt or Purcell, the band opens up to other horizons such as pop and baroque music. The specific quality of the band is to make each piece their own in a common spirit, conjuring new arrangements that possess a beautiful simplicity. The group's open-mindedness was the perfect fit for Carolina Katún."

Listen, buy and read more on Jazzland´s Bandcamp and home page.
Posted by Svenn at 1:50 PM No comments: