Look out for "Piano & Clarinet: Selected Works Vol. 1", the debut album from Group Listening (Stephen Black and Paul Jones) to be released early May 2018. It is a collection of ambient works for piano and clarinet (surprise!), and Robert Wyatt´s "Maryan" is in there.

More info on Bandcamp.
Posted by Svenn at 12:11 PM No comments:

"A few years ago when Robert Wyatt was recording ' Cukooland 'at my studio Eno popped round for dinner ,a chat,and an overdub or two and after a few bevies we had a jam.This track ,The Unknown Zone' grew out of that night's improvisations, as did my track '50 minutes later
Phil Manzanera

Download available.
Posted by Svenn at 10:28 AM No comments:

Go here for Mary Halvorson´s Wire Playlist, and to read more than the lines I copied!

"Known for her experimental jazz guitar playing as both band leader and accompaniment, Boston born Mary Halvorson recently released her first record including vocals and lyrics. In light of this, as well as her cover feature in the The Wire 410, Halvorson has compiled a playlist of songs which helped lead her to the point of forming her own group, Code Girl. The group released their debut LP via New Haven label Firehouse12 in March 2018.

“Here is a playlist including several key influences for my newest project, Code Girl, which is my first leader project that features a singer” starts Halvorson. “All of the musicians on this list have a totally unique concept and approach to lyrics and song. I’m starting with Robert Wyatt because his influence probably runs deepest. He is a true individual and innovator and I’ve spent years with many of his albums on repeat listen. “Sea Song” was the first of his I ever heard, so it holds a special place for me."
Posted by Svenn at 8:50 PM No comments:

The Music of the Cosmos

Just a mention of a new book today. I saw it on the net a couple of minutes ago, and know next to nothing about it.

But here are the facts:
Carole Bulewski: "The music of the cosmos" (KGHH Publishing 2018).

There are some videos on YouTube from a book launch right over here.
In one of them the author says the book is heavily influenced by the Canterbury music scene.
She also admits to being a big fan of Robert Wyatt, so what can possibly go wrong?
Posted by Svenn at 5:51 PM No comments: 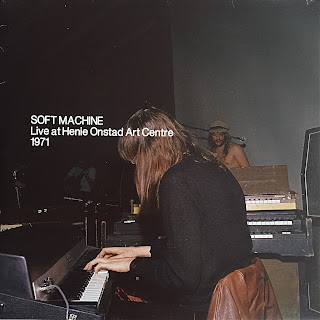 Going to Oslo this year? You might want to visit Henie Onstad and the Boyle family exhibition:

"Høvikodden became a key place of work for the Boyle Family, and in the mid 1980´s, "The Boyle Family Archive" was established at Henie Onstad. This exhibition will showcase this special collection together with a room dedicated to the Boyle’s unique psychedelic light design for the legendary Soft Machine concert at the art center in 1971".

The Soft Machine concert "Live At Henie Onstad Art Centre 1971" was released by Reel Recordings in 2009 and Smalltown Superjazz in 2010.
Posted by Svenn at 10:52 AM No comments: