Tuning up at Dawn 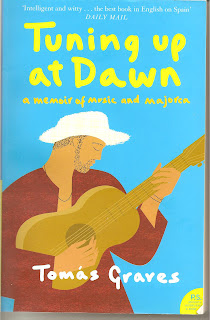 A posting on "What's Rattlin'?" made me buy "Tuning up at Dawn. A memoir of music and Majorca" by Tomás Graves (Harper Perennial 2005). Tomás Graves is son of poet Robert Graves, and tells about the life in Deià on Majorca, where the family lived. Graves writes about Spanish politics and music, latin lovers and (most important to us) the visits they get from various artists. Daevid Allen, Hugh Hopper, Kevin Ayers and Robert Wyatt are visiting, and also lots of other musicians, authors and movie people. Robert Wyatt was named "Batty" Robert, from the Spanish word "báteria" (drum kit).
This is a really nice book, even if I have to say it's a bit too much of everything in here. Even for the latin lovers it could sometimes be too much. Here is one of them: "Once the the pianist and I pulled two monumental Norwegian centrefolds, and the next morning we both admitted to have been so intimidated by such perfection that neither of us had been able to perform as was expected of us." All the way to Majorca, for what?
Posted by Svenn at 7:20 PM