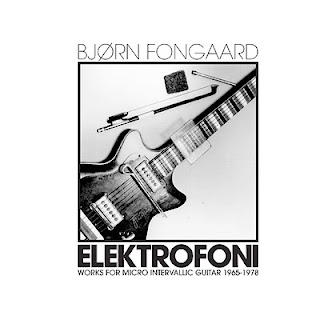 This post is for the ones among you interested in experimental electronic music.
Lasse Marhaug and Lars Mørch Finborud produced this fantastic box with music by the Norwegian pioneer, guitar player and composer Bjørn Fongaard (1990 - 1980).
I have to admit I knew next to nothing about Fongaard, until I heard "Elektrofoni" (Prisma Records 2010).
At the Prisma blog they claim that Fongaard played guitar with popular Norwegian singers of the 60s, which is pretty hard to believe from this box. The subtitle of the box is "Works for micro intervallic guitar 1965 - 1978".

We get three CDs with music:
CD1: Galaxy and other works
CD2: Elektrofonia and Space Concerto
CD3: Sinfonia Microtonalis and Legende

The box also contain a DVD with interviews (Norwegian), TV fantasies, ballets and a fine booklet with texts by Lars Mørch Finborud, Lasse Thoresen and Kjell Tore Innervik (in English).

In Norway we don´t have many record shops left, that will stock stuff like this, but it seems possible to get it from the shop at Henie Onstad Art Center. You may also get mp3s where such files are sold.
Posted by Svenn at 10:22 PM