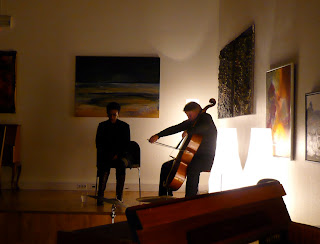 A short report from a Bergen double concert again! This time with Lene Grenager (cello) and Sofia Jernberg (vocal), and 1982.

I bet I already called Lene Grenager (Lemur, Spunk) Norway´s toughest cello player, but Swedish Sofia Jernberg was a new name to me (my fault completely!). She had a fantastic voice and voice control, and the cello and vocal improvisations were hard to believe. Impressed!
Their album "Crochet" (Olof Bright 2009), sounds good too (after one listening only, I have to admit). 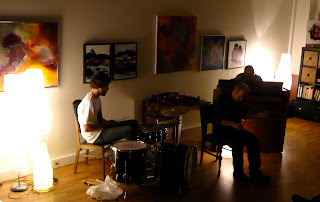 1982 is Nils Økland (fiddles and violins), Sigbjørn Apeland (harmonium, organ) and Øyvind Skarbø (drums). They did a great chamber-folk-improv set under very difficult conditions, the reason being a very loud Salsa course next door!
I might stop telling you to please check out their album soon (see link), but I won´t promise anything.
Posted by Svenn at 9:08 PM