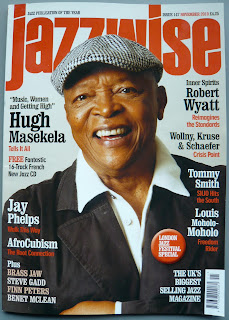 Robert Wyatt and Ros Stephen are interviewed on the  Wyatt/Atzmon/Stephen-album "For the ghosts within" in Jazzwise ("Spectral Voices", November 2010, p 28-29).

Wyatt says he was inspired by Julie London and Peggy Lee, and on the track "What a wonderful world": "Ah, that´s the most avant-garde thing I´ve ever done. I didn´t want it to be ironic".
There are no plans for another Wyatt release right now, but there are ideas lying around. "I wait for them to cohere rather than trying to bash them together for the sake of making a record".
That´s OK! We´ll wait.

I guess you have all read this already, but please excuse me. The magazine arrives in Norway weeks after the UK release, and the price is usually around three times higher too!
Posted by Svenn at 8:12 PM