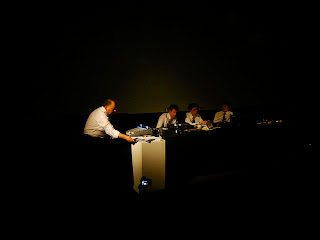 "Eschatology: A live radiophonic drama about the end of the world, witnessed from a liner adrift on a deserted ocean. Written and narrated by Peter Blegvad, Eschatology is a poetic exploration of the end of everything: of land where we take to ships, of radio contact when white noise fills the receiver; of individual sounds as they echo into space".

First broadcast on BBC Radio 3 20 September 2014, and I don´t know how long it will be available on the net, so check it out soon.

More info and credits over at BBC Radio 3.

I heard this piece at the Borealis festival in Bergen in 2013, and the picture of Langham Research Center was taken there. Peter Blegvad was hidden in the darkness, so I caught him on camera while listening to Richard Skelton and Autumn Richardson afterwards.
Posted by Svenn at 10:03 AM