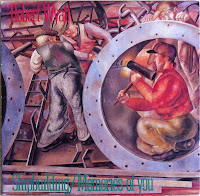 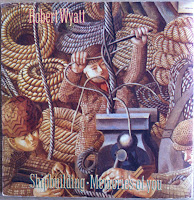 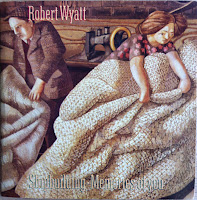 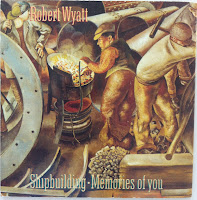 I have been on eBay again, and thought I had all of the versions of Robert Wyatt´s "Shipbuilding"/"Memories of you" singles (Rough Trade 1982) now.

The covers are details of a painting by Stanley Spencer.

My version of the first one there, up left, is not a fold out, the other ones are.
On eBay it seems like there is a fold out version of that one too. True or false?

And yes, I also have the 12" version with "Round midnight" added to the other two songs, with the same cover as the first one here.


Added later in the day:

Read the comment from Arie and go to Discogs to find 11 variations! Oops!
Posted by Svenn at 11:38 AM

Hi Sven,
Yes there is a fold out version. In fact there are 11 versions according to Discogs:
http://www.discogs.com/Robert-Wyatt-Shipbuilding-Memories-Of-You/master/16987