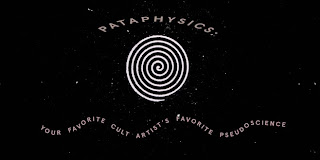 "In terms of his music, the influence of what Wyatt refers to in emails as “Patafizzix” is perhaps most obvious in “Signed Curtain”, a meta-ballad he recorded shortly after leaving Soft Machine. “This is the first verse, this is the first verse,” it begins, and continues in similarly self-referential fashion: “this is the chorus or perhaps it’s the bridge…” And when Wyatt sang on a song for composer John Greaves’ 1996 album Songs, he finally got his chance to deliver the line: “Peel’s foe, not a set animal, laminates a tone of sleep.”"