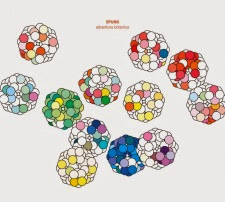 You must not forget to get Spunk´s new album "Adventura Botanica" on Rune Grammofon (2014).
The limited vinyl versions were unfortunately gone in no time though.

The music is based on a commissioned work for choreographer and dancer Odd Johan Fritzøe. Fritzøe´s performance is inspired by the works of Charles Darwin, and here is what is written on his Vimeo: "In the same way as Darwin studied coevolution between plants and insects, Frtitzøe´s ensembly has been inspired by the Darwin ´s theories. The quartet SPUNK has created potent noise poetry provided from five sound sculptures".

The tracks are named after plants: White Water Lily, Mountain Clover and Common Hepatica. Quite an organic and evolutionary album from SPUNK this time.

Have a listen on Rune Grammofon´s Soundcloud, and watch the video from Fritzøe´s performance below.