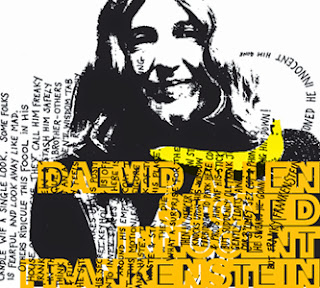 The first solo album is better known as "Bananamoon" (1970).

More info on Planet Gong Bazaar, where I copied this about the three tracks with Robert Wyatt participating:

Out Of Here (alt. version) - [5.37] (C. Tritsch)
The most startling difference here the use of Robert Wyatt's high, angelic-sounding solo vocal for the chorus line as a counterpoise to daevid's deliberately gruff, rough delivery of the verses. On the released version that idea was abandoned and daevid sang all the lyrics in the throaty style.

Instrumental In The Land Of Flip - [11.58] (d. allen)
The clarity and crispness of Robert Wyatt's drumming and Gerry Field's violin playing are the standout features on this layer of the 'Land of Flip' strata, in essence it's the drum track. The drumming is so good and sharp that it makes one wonder that had this been available years ago would it have become one of those eagerly sampled drum tracks?