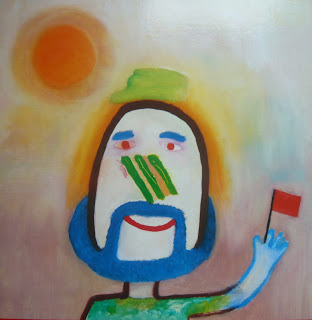 The Italian blog ideeinoltre.blogspot.it has a post on the Robert Wyatt history, focusing on the politics: VALERIO D'ONOFRIO: "Robert Wyatt, il comunista".

Google translate from Italian to English is working quite alright on this piece.

"...Robert Wyatt has never been a politician in the strict sense of the term, has never seen the policy as a job, it was simply an artist who in a restricted phase of his life he perceived with extreme urgency need to engage against racism, Western imperialism , capitalism now prevailing and generally against the huge inequalities and injustices he saw everywhere. For this reason he joined the British Communist Party , not as a leader or as a leading figure , but as a simple militant who loved to talk , exchange ideas , explore topics with other members of the party."