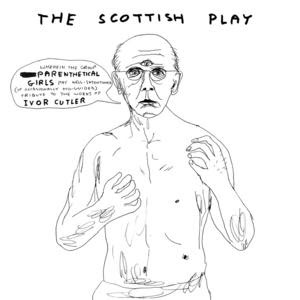 Portland, Oregon´s Parenthetical Girls have chosen Glasgow´s great poet Ivor Cutler as the man, for their 10" "The Scottish Play: Wherein the Group Parenthetical Girls Pay Well-intentioned (if Occasionally Misguided) Tribute To the Works of Ivor Cutler" (Tomlab 2009). There are only 500 copies for sale, but you may download it from both iTunes and eMusic. Cover art by David Shrigley (Glasgow). The band do fine versions of Sit Down, Whale Badge, Doughnut, A Nuance, Over You Go, Going In A Field, The Best Thing and Everybody Got.

Ivor Cutler (my way of presenting it, hope it´s not far from Mr Cutler´s)

I have to admit I never heard about Parenthetical Girls until now, but this seems like a band worth checking out. See the video for "A song for Ellie Greenwich" (from an earlier album).