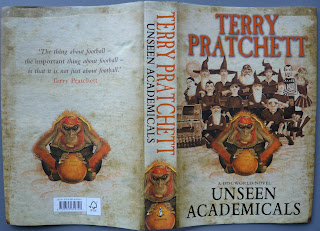 It´s been two years since the previous Discworld book ("Making Money") and one year since the previous book for young readers (that´s me included) ("Nation"), and now Sir Terry Pratchett´s new Discworld novel "Unseen Academicals" (Doubleday 2009) is in the shops. This time Pratchett takes a look at football (foot the ball) the Discworld way, and it may sound unbelievable but the smoking, drinking and eating wizards are playing! The capital goes bananas (of course), and our team is in fact doing well (OK, that´s pushing it) with the help of the tactical genius Mr Nutt. Mr Nutt is in fact an orc (the real evil), but he is of course accepted in the end, as werewolves and vampires are. And why not?
I sniggered my way through most of the book (and added a few good laughs), and was happy to meet again some of the old Discworld figures like my fast food hero CMOT Dibbler (cheap rat on a stick, "And that´s cuttin´my own throat").

Read an interview with Sir Terry Pratchett in theTelegraph. He´s got Alzheimer, but I hope he will manage to write some more Discworld novels!
Posted by Svenn at 8:11 PM