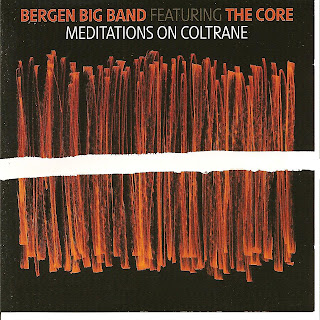 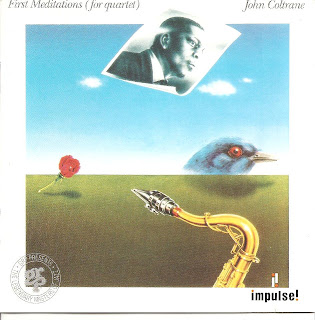 News for fans of John Coltrane's music: My local big band, Bergen Big Band, and one of my favourite Norwegian jazzbands The Core have released a live album (recorded at Nattjazz 2007), where they perform a suite dedicated to John Coltrane's ”Meditations”. I'm usually not too keen on big bands, since I feel a lot of the energy seeps out of the music when the focus is on arrangements, but I guess that is my problem. I support my local jazz musicians anyhow, and say this album is more than OK.
These first days of 2008 I have been listening to ”Meditations on Coltrane”, John Coltranes ”Meditations” from 1965 (John Coltrane (ts), Pharoah Sanders(ts), McCoy Tyner (p), Jimmy Garrison(b), Elvin Jones (dr) og Rashid Ali (dr)) and ”First Meditations (for quartet)" recorded a few months earlier (John Coltrane (ts), McCoy Tyner (p), Jimmy Garrison(b) and Elvin Jones (dr)). Wikipedia's words on Meditations: ” Much of the recording is fairly avant-garde, featuring extensive passages in free rhythm and extended saxophone techniques such as honked, multiphonic, and overblown notes”. Lots of energy on these recordings.
Dave Liebman seem to have done the same thing as Bergen Big Band, and recorded "John Coltrane's Meditations".
Posted by Svenn at 4:55 PM