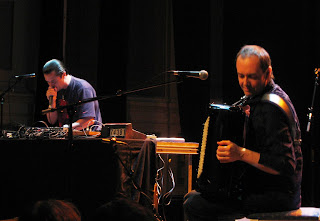 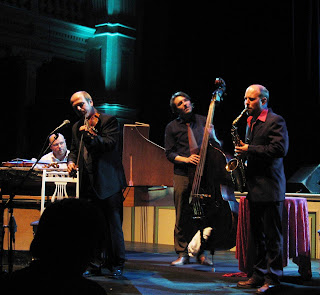 Oh damn, what a long night it was, the first day of the Borealis festival in Bergen. Five hours is too much for an old man like me.

The first “band” out was Ensemble Rechercehe, playing works by Schönberg, Schwehr and festival composer Spahlinger. I'm not really able to dive into this music, but I try. Much of it was played in a very silent way, and with long pauses and breaks too. Some of it though is real fun, but my God they look serious, and you know it’s contemporary classical when the piano player is more inside the piano, than he is playing the keys. The sounds of knees and backs aching among the audience, added a nice ambience to the show.

Next came Nils Økland Ensemble with a piece made for the festival ("Scordatura"). A lot of fiddles, and some good fun too in a hunter's suite that really would scare the moose (bottom picture).

Last but not least: Mike Patton and Stian Carstensen (Farmers Market) (top picture)! Wow, what a duo! Patton sings both like a metal screamer and an Italian crooner (and Elvis) and Carstensen plays anything you hand him from guitar to accordion to steel guitar and so on ("Ladies and gentlemen: The banjo!"). They were having a great time on stage, ending the show with Bowie’s “Life on Mars”, and the audience were one big smile.
Posted by Svenn at 5:50 PM