Play your own thing 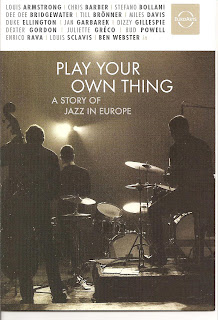 Everton beat Brann with two goals in the UEFA Cup in Bergen today. Sorry, but I got a package from Amazon and was watching the DVD "Play your own thing. A story of jazz in Europe" (Dir. Julian Benedikt, Euroarts 2007), as the home team lost. This is a quite good documentary, and you get some more music than the cut and jump technique documentaries usually are made of. You get your American musicians in Paris and Copenhagen, and nice servings of German, Austrian, Italian and Scandinavian music. I think the British will have to make their own DVD, because I got a feeling they were underrepresented here.
So nice to see (among others) young versions of Albert Mangelsdorff and Niels Henning Ørsted Pedersen (his mother had to OK his playing in clubs) and charming sax man numero uno Dexter Gordon.
And surprise, surprise, Robert Wyatt talked a couple of minutes too! His opinion was that Europe's most important contribution to jazz, was listening to American jazz musicians (and constructing the saxophone).
Posted by Svenn at 11:18 PM